SftBox/OCX 5.0, the most feature-complete ActiveX combo box control just got even better with this new release. With excellent performance and lots of features that you won't find in any other combo box.

Find out about all the new features in this new version. 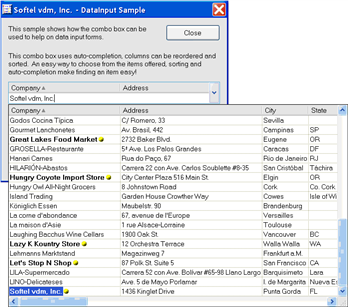 Tired of the basic combo box you get in Windows? SftBox/OCX is a super-charged combo box and offers many more features such as auto-completion of entered text, multiple columns, headers, bitmaps, hierarchical display, auto-drop, OLE drag & drop etc.

This ActiveX control is implemented using Microsoft's ATL framework, with dual interfaces, resulting in excellent performance, yet, the control is very small and doesn't require any additional DLLs. We even include a sample application so you can determine the "raw" speed of the control.

Use this ActiveX control with all popular languages, such as .NET, VB, C#, Visual C++, Visual Basic 6, Delphi, Access and many more...

The basic combo box styles are fully supported: Simple, Drop down and Drop down list. Each can be used with all of SftBox/OCX's features such as multiple columns, bitmaps, check boxes, OLE drag & drop, etc.

Using the property pages, designing a prototype can be done literally in minutes. 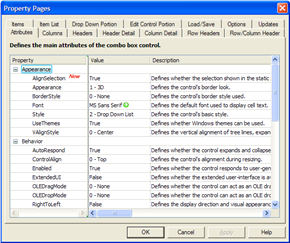 Complete help files and context sensitive help is available from each property page simply by right-clicking on any property shown.

Complete syntax for Visual Basic, Visual C++, C#, VB.NET, C and Delphi are included, making the control easy to use in any environment.

And, SftBox/OCX is also backed by our technical support by telephone and email. Product support requires a current annual support subscription (the first year is included in the product's purchase price).

Most of SftBox/OCX's attributes can be customized. All options can be disabled, making SftBox/OCX look like a standard Windows combo box, or you can enable all the special features, such as headers, fonts, background colors, images, tree lines (and much more).

How Fast Is It?

SftBox/OCX is implemented in C and C++ using Microsoft's ATL framework (without MFC or other common DLLs) and offers dual interfaces throughout. Because of this, it is very fast. You can even test its speed with the Speed sample included in the demo and the product.

The control is not based on Microsoft's combo box, so it doesn't "inherit" any of its problems either.

Compare our control's performance to your favorite combo box control and you decide.

SftBox/OCX is written in C and C++. About 50MB of disk space are needed to install the developer version of SftBox/OCX, 1 MB for the OCX control only. Of course, the OCX control included in SftBox/OCX can be redistributed royalty-free with your completed end-user application.